From Bristol, Chris graduated from the University of West England in 2001, with BA (Hons) in Illustration.

Primarily a fashion illustrator, Chris has produced illustrations for Zara, Spain and his work has been published in fashion and creative press in the US, Australia and Europe. In 2017, he was the featured artist in Voir Magazine and in 2018 his worked featured in the Brazilian fashion magazine, Revista Caterina. In 2018, he was also featured in the PatternBook blog, as ‘one to watch’. In 2020, he featured in British Vogue and also created the cover illustrations for the Artemisia Gentileschi biography written to accompany an  exhibition of her work at The National Gallery, London

My reason for illustrating is to explore form. I was a stone sculptor and this remains even when working in 2D, I still feel a compulsion to ‘carve the page’. The designs of Comme des Garçons resonate for me – the sculptural forms are a constant source of inspiration. Italian Artist Lorenzo Mattotti is probably my biggest influence, the composition and colour of his work is breath-taking. He manages to set up a tension of movement and vibration within an image.

I am in a constant state of flux with materials and working method as every image seems to suggest a different tool. I don’t think I have ever settled into a style and not sure if I ever will.

Chris has many collectors of his work, both nationally and internationally – we happily post out his unframed pieces to the UK and abroad. Please enquire for further details.

We often get new pieces in to replenish those sold – Chris’ work does not hang around for long! 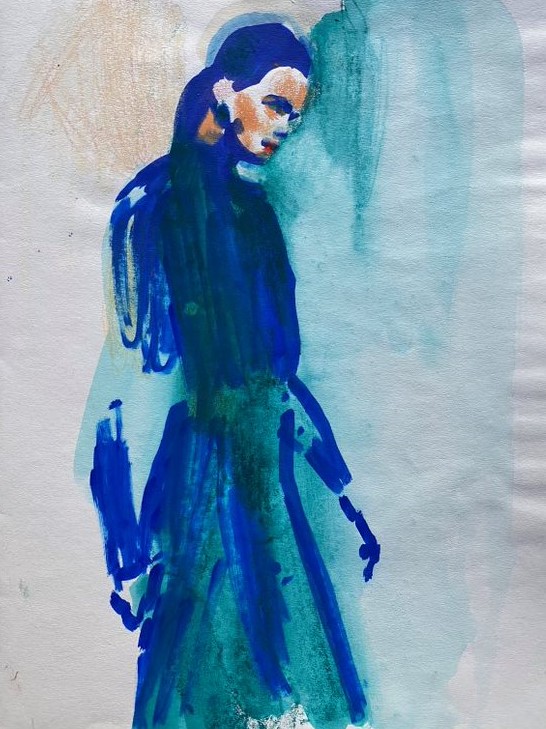